Page Meadows is a WONDERFUL place to hike to see wildflowers in the Lake Tahoe area. It is easy to reach, there isn’t a lot of elevation change, and the meadows can be chock-full of native wildflowers. This is going to be one of my go-to spots each year!

This is an interesting site because there is a series of meadows that are connected by a mesh of trails. Each meadow is a bit different, and you have multiple options for entry points as well as paths to take. On this visit (June 2020) we hiked a 3.3 mile loop that took us through four meadows, and each had a different selection of wildflowers.

Here’s a sample of a few of my favorites from this hike (click on the image to see a larger view).

For me, the big hit of the hike was Porterella, a wildflower that I’ve never come across before. This was a surprise – earlier in the day we had hiked at a different area (Taylor Creek) looking for this wildflower, and we were unsuccessful. I didn’t realize we would find it here, and we found masses of them blooming in several of the drier meadows.

Porterella is very similar to Downingia, which I’m more familiar with. The differences are hard to detect, involving some internal features of the flower.

Early in the hike we crossed a stream, where there were multiple species of wildflowers just starting to bloom. The selection here was quite different than what we found out in the meadows. This is why I like the trailhead we used, if you start at one of the others your trail most likely won’t take you to this spot. Here’s a Sierra bog orchid, just starting to bloom.

Along the edge of the wetter meadow we found a few small camas lilies still in bloom. You’ll see more if you come earlier in the year.

On the hike out, after the meadows, we found one remaining Snow plant that was in good condition. This is another flower you’ll see more of if you come earlier, but they are in the wooded areas, not out in the meadows.

If you click on lightbox image below you will be able to scroll through all of the plants (and other things) that we found on this hike. All photos are available for purchase in a variety of formats.

This is what you call a “balloon” hike – about a 3/4 mile hike in, then a loop until you join the entrance trail, and a hike back out. The total distance was 3.3 miles, with very little elevation change. I think that the next time I go here I’ll do an out and back, going further east to see some of the other meadows in the area, and then heading back. The return loop we took this time went through dense forest and there wasn’t a lot blooming there (although, that is where we found the snow plant!).

You start off on a dusty fire road, but soon that turns into a narrow track. The trail is easy to follow, although there can be muddy spots. About a half mile in there is a stream crossing. 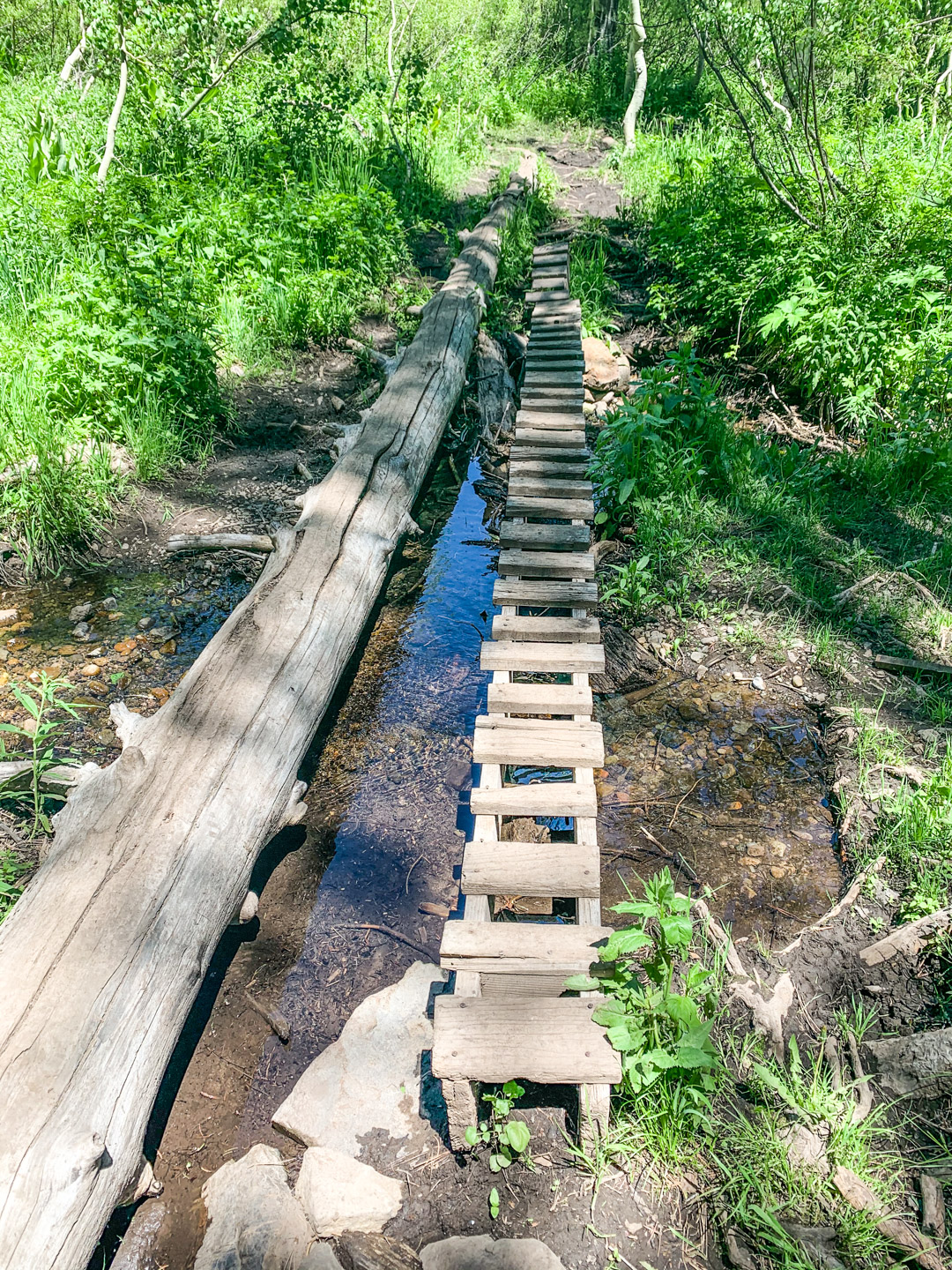 This is a good spot to explore, there were many wildflowers tucked under the bushes on both sides here, that you won’t see later. Monkeyflower, toad lily, orchids, and more. There was a small meadow (listed as “first meadow” in the photo gallery) that had valerian and bistort in bloom.

After about a mile you come to the first of the big meadows (which I label “second meadow”). The trail skirts the edge, because much of the meadow was still flooded. Along the trail here we found camas lily, larkspur, a several additional species of monkeyflower.

A half mile further on we came to a drier meadow (“third meadow”). This is where we found the Porterella scattered about, and meadow penstemon.

After this was a fourth meadow, which was the driest of all (white penstemon here), and then the trail turned back into the forest. There wasn’t as much variety here.

As you can see, there weren’t big masses of blossoms on this visit, but I was happy with the variety of wildflowers that we found. I think that in a wetter year, and perhaps a bit earlier in the season, it will be more colorful.

Page Meadows is located west of Lake Tahoe, not far from Tahoe City. There are multiple trailheads, all of which (as far as I know) are located on residential streets. Please be kind to the homeowners and don’t block driveways!

I’ve only used one trailhead, which is at (approximately) 3500 Chamonix Rd, Tahoe City. From the roundabout at Tahoe City you will head south on Hwy 89 along the lake for about 2 miles, turning right (west) onto Pineland Drive. After 0.4 miles turn left onto Twin Peaks Drive, and then take the first right onto Ward Creek Blvd. There is another trailhead somewhere along this road, but I didn’t spot it. After 2.5 miles you will turn right onto Chamonix Rd and drive to the end of the cul-de-sac. The trailhead is on the north side, where there is a gate blocking the access road (which is the start of the trail). Don’t park in front of the gate.

A short way in there will be multiple splits in the trail (which starts as a dirt road), in general you want to turn to your right, until you get to the meadows. Following a GPS track with your phone or tracking device is recommended, as there are few (if any) trail signs, and a lot of trail junctions.

Note that there are no toilet facilities anywhere along this hike.

There are other ways to reach the meadows – several road-ends in the Talmont Estates housing area as well as a spot on Granlibakken Road. You can also access the meadows from the Tahoe Rim Trail, which runs nearby (and that website points out the trailhead that I didn’t spot on the drive in).

Some portions of the trail are used by mountain bikers, and some of the bridges across streams are maintained for that use. Sightlines are very open here, so there was little chance of any biker-hiker collisions (I tend to be a hazard for bikers if I’m taking pictures of flowers right along the trail, so I try to keep watch).

This is an interesting area, and I’m sure that the wildflower season is quite long. Our visit was in late June of a fairly dry year (2020). Some wildflowers were just about finished, others were just starting up. The interesting part about this hike is that each of the meadows that we passed through was at a different moisture stage, which spreads out the bloom. We crossed a creek that had many wildflowers just starting. One meadow still had quite a bit of standing water in the center, and it might be difficult to get around it earlier in the year. The next meadow had just dried out, and the meadow beyond that had been dry for several weeks. Lots of variety, which means a long blooming season.

Mosquitoes weren’t a big problem (we hiked midday), butterflies were plentiful. We only saw three people (two on bikes, one hiker) the entire time.

Here’s a listing of the native plants that we found on this visit. I don’t have pictures of all of these in the gallery, as sometimes I’m just taking low resolution pictures using my phone camera to ID the plants (I use those for iNaturalist observations).

The ones listed in color are endemic to California (that is, found only in California). “nif” means “not in flower”. In most cases the scientific name will be a link to a reference source such as Calflora.