One of the most amazing wildflower spots in Northern California is Bear Valley, in Colusa County. While this is a somewhat remote location, the wildflowers are actually very accessible because you don’t have to hike a long distance to see them – you can drive right up to the fields. Here are some views of Bear Valley wildflowers that I’ve compiled from multiple visits over the past 6 years.

Please note that almost all of the land along this drive is private property, so you need to stay on the roads (and the immediately adjacent area). Don’t cross into any of the pastures. Fortunately, at the top end of the valley you will find a “wildflower access” gate to a pasture in the Keegan Ranch, where they allow folks to come in and enjoy the wildflowers. This is only open for a short time, April and early May usually, when the wildflowers are at their peak.

As you drive up the valley from the south end (which is my preferred approach) you go through a variety of habitats. I’ll give you a few examples of flowers that you’ll see in each section, with more in the galleries at the end. I’ve also posted directions to the road later in this post. Click on the photos to see a larger version.

Bear Valley Road starts at the junction of Highway 16 and Highway 20 in Colusa County. Some years you may see a big display of California Poppies in the meadow on the opposite side.

The dirt road takes you through the hills, which are mostly shale and sandstone with scattered serpentine outcroppings. You’ll find a number of species of wildflowers along the road and up in the narrow gullies on the east side. Lots of variety, not a lot of abundance of any particular species. Wide spots for parking are not common, so take care to not block the road.

You’ll find several species of lupine along the road here. This year (2020) the whitewhorl lupine were very showy.

There are several native onion species in this section. They prefer serpentine soils, which are very harsh (more on that later) and tend to be redder than the sandstone/shale areas. Here’s Purdy’s onion (from 2014), a relatively rare species.

In 2020 the most common onion was Jeweled onion.

After a few miles you will come out into a more open hilly area, with rolling pastureland. Again, explore from the road, the pastures are private property. Here’s a hillside covered with purple Chinese houses.

There are several species of Larkspur here, including Royal larkspur.

You’ll also see death Camas (aka star lily), several species are found along the roadside and in the pastures.

Eventually you come out to the flat valley floor. Again, these pastures are private property, so don’t cross into the fields. There are plenty of flowers to see from the roadside, and later you will get to enter one of the fields.

The display of colors you’ll see varies from year to year, depending on rainfall and temperature patterns. Note that you won’t see this kind of display over the entire valley floor, you will see one area that is very colorful and then another that isn’t. Keep driving north even if things look like they are not blooming, because the next pasture will be different!

Here’s a rare plant, large flowered star tulip, which we found right along the roadside. You have to look closely as you drive along, as these are very low and are found in only a few spots.

Eventually you will come to the Keegan Ranch. We are very fortunate that they allow people to enter one of their pastures during wildflower season, which lets you get a close look. Look for this sign:

Here’s a view of that pasture from 2020, when it was a mass of tidy tips and goldfields.

One of the wildflowers that you may find here, which you’ll often see in massive drifts across the valley, is Cream cups.

This also is a good spot for Purple owl’s clover (and you may find the white variation of it here, too).

If you click on lightbox image below you will be able to scroll through the photos of the wildflowers that we’ve come across in visits here from 2014 through 2020. You won’t see all of these on any given visit. Every year is different! All photos are available for purchase in a variety of formats.

Here is another gallery of photos that includes landscape shots of different portions of the valley.

Why is Bear Valley so special?

Bear Valley is an amazing wildflower site due to a combination of several factors:

Bear Valley is at the juncture of multiple tectonic plates, which creates a variety of interesting geological features in the area. One of the results of this activity is that ultramafic (serpentinite) bedrock is commonly thrust up to the surface near the edges of these colliding plates. Serpentine soils result from the weathering of serpentinite bedrock.

The ridges that bound Bear Valley (such as Walker Ridge) include large amounts of serpentine soils, and as they erode the alluvial fans in the valley in turn often have high levels of serpentine.

Plants that thrive on serpentine soils are unusual. They are adapted to utilize calcium in soils dominated by magnesium and can tolerate concentrations of cobalt & nickel that are toxic to most plants. This is one of the factors that affects the plant community in the area – invasive (European) non-native plants generally don’t thrive in serpentine soils. Many of the native plants here have a high affinity for serpentine. 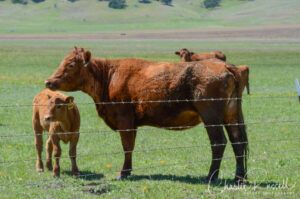 A large percentage (perhaps all?) of Bear Valley is protected by conservation easements managed by the California Rangeland Trust. At this time 20,089 acres in the Bear Valley have been conserved, including:

Conservation easements protect the valley from development, thereby preserving this amazing habitat. In addition, grazing on the ranches is managed in a fashion to mimic wild grazing animal foraging, and to promote native plant growth.

Bear Valley is located in Colusa County. From the central valley take either Highway 20 west from Williams, or Highway 16 north from Capay. A few hundred yards west of the junction of 16 and 20 look for a sign on the north side of the highway for “Bear Valley Road”. This is a dirt and gravel road, usually easy to drive on for most cars, although in wet years the road can be rutted and even partially blocked by small rock slides.

Note that most areas along the roadside are private property, so don’t wander into the hills or pastures along the way.

The road wanders through the foothills alongside Bear Creek, and you will find scattered pockets of wildflowers along the way. At about the 4 mile mark you will see a turnoff for Wilbur Springs – continue straight (north). You will be staying on this road for the rest of the way.

After another 2 miles (more or less) the landscape opens up to rolling hills, and you may start seeing big displays of wildflowers in the pastures along the way. Some years they are abundant, some years there just isn’t much here.

Eventually you start zig-zagging across the valley, with pastures on both sides of the road. You’ll cross over Bear Creek a couple of times. Different pastures will have different collections of wildflowers, and they can be amazing. About 7 miles in you will see a sign for “Wildflower Access” on the north side of the road – this is the only pasture that you are allowed to enter. Enjoy!

On average, April is the best time to visit Bear Valley for the greatest variety of wildflowers. You will find some species in March, particularly on the hills and ridges around the valley, but for the big flower displays you want to come in April. Peak bloom will vary quite a bit depending on temperatures and rainfall patterns. I’ve had the best luck in mid to late April. Once you get into May things start to dry up, and the Keegan Ranch wildflower access point will be closed. Some years the big displays just don’t occur, but you can still find lots of flowers in scattered locations.

Temperatures are usually in the 70’s to 80’s then (usually), you may get some rainy days. The biggest hassle is that it can be a bit windy there. Note also that in wet years the gravel road into the valley from the south may be obstructed by rockfalls early in the season.

Here’s a listing of the native plants that we found at this location. This covers multiple visits from 2014 through 2020 (always in April). There are many more in the area than I list here, but every year you get a different collection blooming. The ones listed in color are endemic to California (that is, found only in California). CNPS numbers are ratings for rare plants by the California Native Plant Society (see my explanation of CNPS ranks). In most cases the scientific name will be a link to a reference source such as Calflora.

The following are non-native plants that we found on the hike as well:

We also found a number of other interesting things: